Keppel Bay Marina is this year celebrating 20 years since opening for business, creating a gateway for boating around the Keppel Islands and welcoming local and visiting boats to the Capricorn Coast.

The Wilson Family acquired this development project in 1989. Richard Wilson a 4th generation Central Queensland cattleman and his wife Libbie were inspired by the vision for this project and what it would mean for Central Queensland.

“We saw this project as an opportunity to make a significant contribution to the region, and really put the Keppel Islands and Capricorn Coast on the map” says Richard Wilson.

While the extensive planning, development and construction of the project was commenced a decade prior, on 27th April 1996, Stage 1 of Keppel Bay Marina as we know it today was launched by the then Premier of Queensland, the Hon Rob Borbidge MLA.

Prior to 1996, to own a boat on the Capricorn Coast meant having it on a trailer, or anchoring in creeks or rivers to seek protection from the weather. Early photos show a number of boats seeking free safe anchorage in the newly created Keppel Bay Marina basin prior to the construction of pontoons.

The first 165 berths took only a few years to fill, necessitating expansion in 2000, then again in 2008 and most recently 2013 marked the opening of the Northern Marina by Her Excellency Penelope Wensley AC, the Queensland Governor at the time and brought the total number of berths to over 500 and made Keppel Bay Marina, the largest privately owned marina in Australia and the largest in Northern Australia.

Ferries operated from Rosslyn Bay Harbour prior to 1996, but opportunities for cruises, boat charters and fishing charters were limited until the Marina Centre opened in 1996 providing Tourist Services and ferry and charter ticket sales. Keppel Bay Marina won its first of many Tourism Awards with the Central Coast and Southern Reef New Tourism Business in 1997, and was inducted into the Tourism Hall of Fame as a Significant Regional Attraction in 2006 after winning this award for three consecutive years.

The Waterline Restaurant, as we know it today, started as a small counter in the corner of the Marina Centre, serving coffee, cake and sandwiches to vessel owners, enlarging across the building in December 1999.

Today, a jewel in the crown of the Capricorn Coast dining scene, The Waterline Restaurant is the most awarded restaurant in the region, favourite dining destination for locals and a drawcard for tourists to the Capricorn Coast wanting to experience the best local Banana Beef and Keppel Bay Seafood.

A significant feature of Keppel Bay Marina and one which sets it apart from other marina developments is the extensive landscaping which has been designed to blend with surrounding National Parks, and create a unique atmosphere for visitors to enjoy.

The landscape began in 1991 planting the Breakwater Drive access road with plants from tubestock and grown out and propagated in our own nursery on site. The Marina Centre landscape began early 1996 with mature Pandanus from a nearby waterhole and mature Queen Palms with small plants and cutting in between.

In 1997 the Marina won the Pinefest Classic Garden Competition which was the first of many such awards. Truckloads of cotton seed, cattle paunch material, thousands of Morning Bulletin and Capricorn Mirror pages and mulch have provided organic matter to the salty silty sand dredged material.

The future of this remarkable development comprises a resort site, tavern, hotel, commercial centre, and further residential in varying sizes and configuration.

Keppel Bay Marina has been a catalyst for the growth of the Capricorn Coast, attracting tourist operations, marine trades, residents and developers to the region and facilitating tourism to Great Keppel and surrounding Islands and expanding boat ownership and enjoyment in the region.

Keppel Bay Marina will celebrate 20 Years on Sunday 24th April with the community invited to enjoy the boating facilities, dine at The Waterline Restaurant, browse the display of history and memorabilia, enjoy Ryan Conway playing Live on the Lawn and entertainment for the kids 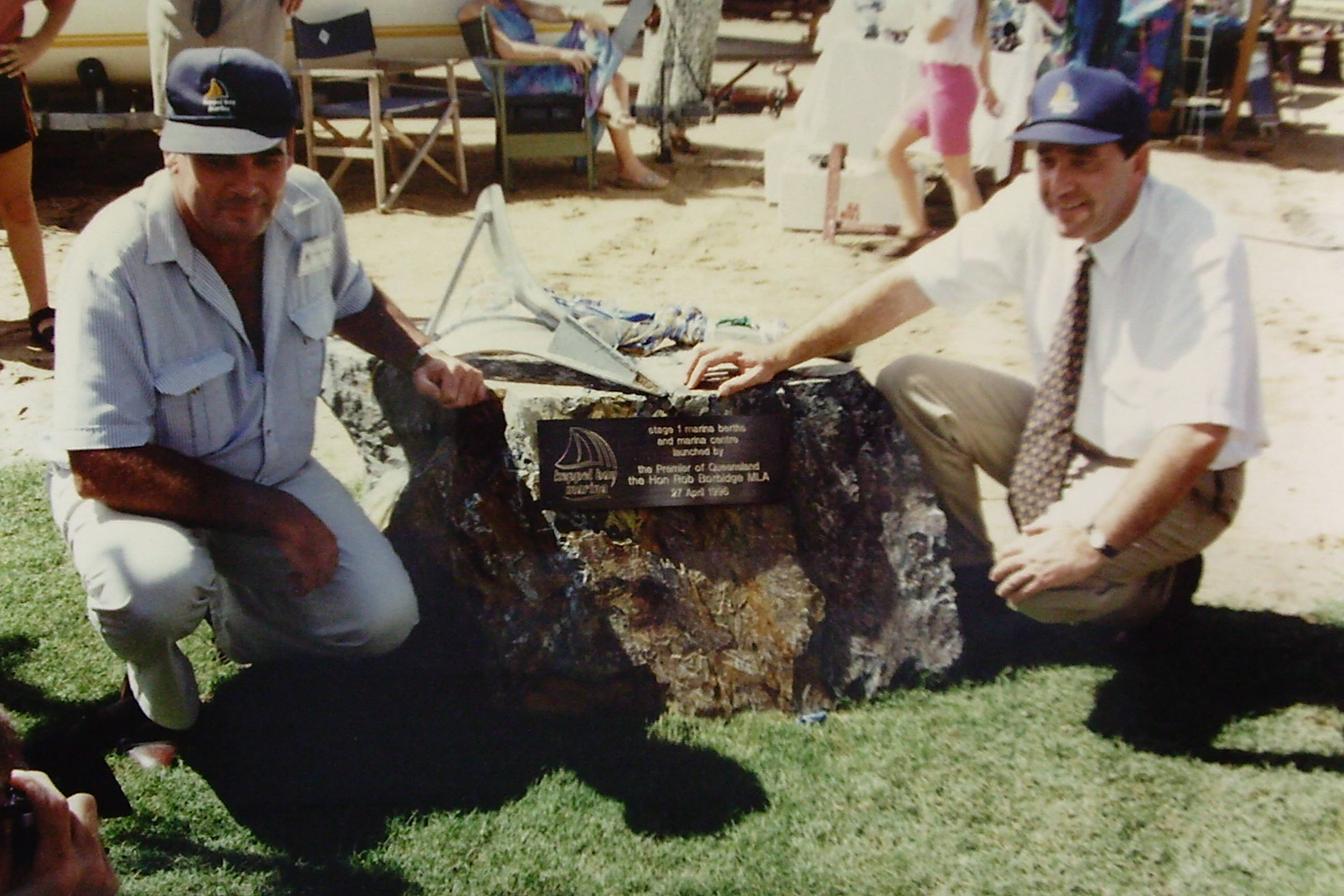 April 1996 – Richard Wilson and The Honourable Rob Borbidge MLA, Premier of Queensland unveil the ceremonial plaque for the opening of Keppel Bay Marina