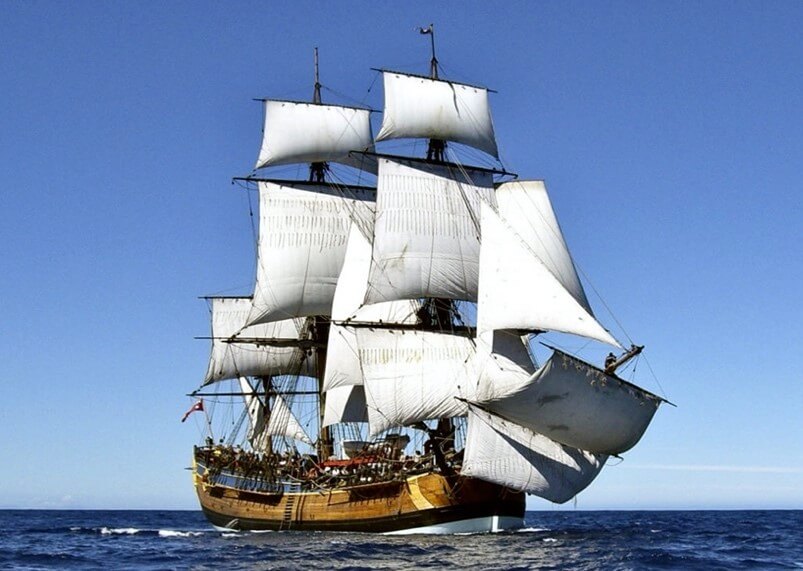 Most people have heard of, and know something about, Captain James Cook and his voyage of discovery up the East coast of Australia in 1770. However, not everyone knows that on the 26th MAY that year, he sailed his ship HMB ENDEAVOUR into Keppel Bay and anchored overnight between North Keppel Island and modern-day Yeppoon – just 250 years ago.

At midday on the 26 MAY, James recorded Endeavour’s position as Latitude 23 Degrees, 7 Minutes South, and Longitude 150 Degrees, 50 Minutes East. This is almost exactly half way between Rosslyn Bay Harbour and the North Keppel Island Environmental Education Centre.

He sailed further north for another hour between North Keppel Island and the mainland before shallowing waters forced him to stop and anchor while he sent the Master ahead in a ship’s boat to sound a passage. When such could not be found, Cook sailed back the way he had come and anchored a little East of his midday position for the night in deeper water.

Next morning, the Master reported a good channel to the East. Endeavour then set sail to the south of Pumpkin Island and turned north, passing  between North Keppel Island and Outer Rock.

Naturally, any commemoration has to be planned around the current Covid-19 virus restrictions. Sadly, this means no ferries, crowds or gatherings are allowed. In spite of this we have come up with a lawful workable plan to commemorate this very important historical milestone.

On Tuesday 26 May 2020, boat owners are invited to cruise about 3.5 nautical miles from Keppel Bay Marina to a position, about half way to North Keppel Island and anchor safely in a group.

This was the position of ENDEAVOUR, recorded by James Cook, at Midday on 26 May 1770.

Preferably, all boats would be in position by say 1145 hrs when there would be a short commemorative speech followed by the casting of a Commemorative Bouquet into the ocean at midday, exactly 250 years after James Cook sailed ENDEAVOUR over the very spot.

For communication and speeches on water, we would ask all boats to initially tune to Channel 21 VHF Marine Radio as they normally would. A few minutes before speeches (say about 1150 hrs), an announcement will be made on Ch 21 to change to Ch 72. The ceremony will then be transmitted on Ch 72.

At the end of the short ceremony, all boats would be invited to cruise another 2 nautical miles East to the position where ENDEAVOUR anchored for the night of 26 MAY, before departing next morning, around the south of Pumpkin Island and then turning north.

Keppel Bay Marina encourages all vessel owners to participate in this wonderful celebration of the history of Keppel Bay.

The Plan has the blessing of the Capricorn Coast Historical Society and Don Price (a local James Cook historian).

Join Yeppoon Coast Guard, members of the CCYC, Yeppoon inlet Association and Fitzroy Motor Boat Club, and the boating community at large to recognise and celebrate this memorable milestone in our history.

9th April 2020 As we approach the Easter weekend, there is a strong message from our Nations Leaders to stay home and…