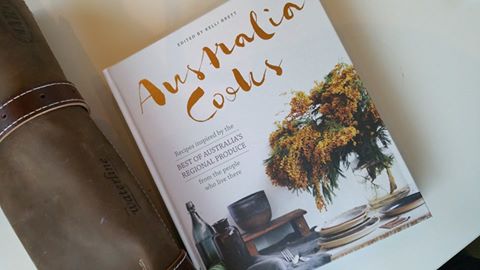 The Waterline Restaurant is widely known for specialising in the best local produce, particularly their Banana Station Beef and fresh Keppel Bay Seafood. It is this specialty that has coined the phrase “Where the reef meets the beef” to describe the spectacular waterfront location of the restaurant.

As Keppel Bay Marina and the Waterline Café (as it was originally known) celebrate 20 years, the reputation of the Restaurant as being at the forefront of the industry has been acknowledged, with Executive Chef, Matt Smith invited to contribute to the soon to be released Australia Cooks recipe book.

“Recipes inspired by the Best of Regional Produce from the people who live there” is what the book is all about. It features recipes sourced from around Australia via an ABC local radio call out to foodies to design a dish that defined their region on a plate.

The author also invited a few regionally based professional chefs “who have built their business on championing local ingredients and supporting their food communities.”

“Matt loves Queensland’s coastal lifestyle, but it is Central Queensland’s food bowl that really excites him… in Yeppoon where the reef meets the beef, there are beautiful local ingredients that will inspire even the fussiest chefs”

The recipe Matt selected to feature in the book is his famous Banana Station Beef Tataki. This dish won the Best Beef signature Dish at the Beef 2015 Restaurant Awards, and has been the signature on the menu for several years.

“The dish is all about the flavour of the grass fed Banana Beef, paired with simple Asian flavours that enhance the earthiness and flavour of the beef”

Banana Station Beef Tataki is on the Evening Dining menu at The Waterline Restaurant open from 7am 7days, evening dining Wednesday to Sunday.