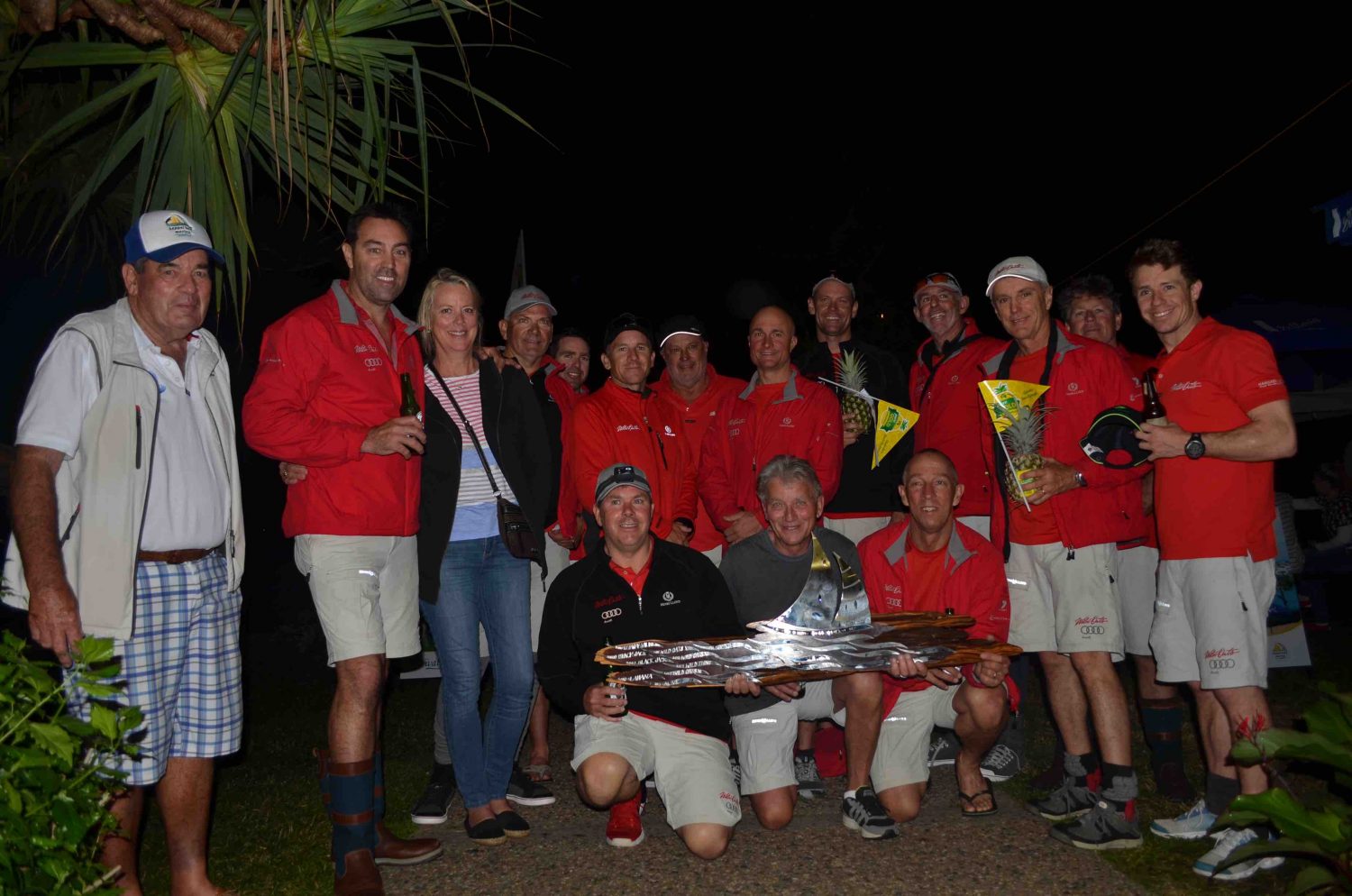 “Wild Oats XI this is the finish boat welcome to Keppel Bay,”

“Wild Oats to finish boat, it’s good to be back.”

Skipper Mark Richards says the conditions were in their favour for most of the race.

“It was a pretty easy race. We had a good breeze at the beginning, then last night we had some light air but we got good wind at the end and here we are.

It wasn’t all smooth sailing though, the crew got to the start line with just a minute to hoist sails.

“We got to the start very late. We put ourselves under some pressure but once we dealt with our glitches we were off,” Richards said.

Supermaxi Wild Oats XI’s line honours win seemed never to be in doubt and their journey was made easier when Black Jack was forced to pull out prior to the race start due to damage to their bow sprit.

“They (Black Jack) were as disappointed as we were but that’s racing. It would have been a lot of fun between the two boats, I mean there was only 3min 31 sec between us at last week’s Sydney to Gold Coast but hopefully we’ll see them again at Audi Hamilton Island race week,” Richards said.

Wild Oats XI accelerated off the start line and was ahead of the pack within ten minutes of the start.

“We’ve got a fantastic crew. “Boats are not easy to sail and a good team is important. We’ve been sailing together for a 13 years and we deal with most situations well.

“One of the biggest challenges was missing the whales. One of them swam belly up straight under the boat. There were so many whales, sharks and dolphins,” Richards said.

“The Brisbane to Keppel is a nice race, it’s quite different with lots of directional and tidal changes.

“This race is fantastic prep for the Rolex Sydney to Hobart. It’s good training and getting the comraderie thing working that’s a big deal,” he said.

But for Richards and the Wild Oats XI crew there seems to be one other big drawcard in the Club Marine Brisbane to Keppel Tropical Yacht Race.

It’s a very relaxed destination and when you get here there are cold beers and an awesome steak.

“The Capricorn region is famous for our Banana station beef, our Pure Gold pineapples and our hospitality, we had all three waiting at The Waterline Restaurant as soon as the 19 Wild Oats XI crew stepped off the boat, not too mention some very cold Heineken.

So what would Skipper Mark Richards say to anyone thinking of doing the Club Marine Brisbane to Keppel Tropical Yacht Race? Go for it.

“Take it on, it’s got to be on your bucket list. The coastline is pretty special and the wildlife and the marine sanctuary is amazing.

9th April 2020 As we approach the Easter weekend, there is a strong message from our Nations Leaders to stay home and…