Winemakers Evening at The Waterline

Join us for an evening of fine wine, great food and good company.  The Waterline is proud to welcome Gavin Berry, Managing Director and Senior Winemaker at West Cape Howe Wines to our Region.

West Cape Howe was founded in 1997 and soon became one of the most popular wine brands in Western Australia. Over time it has acquired some of the oldest vineyard resources in the state, giving it un-equalled access to the best and most consistent quality fruit that the cool Great Southern wine region has to offer.

The Waterline Restaurant will be offering a five course cocktail menu matched with five wines selected by Gavin, to showcase West Cape Howe’s driving philosophy which is “to make delicious wines of harmony, balance, structure and flavour – wines that people love to drink!” 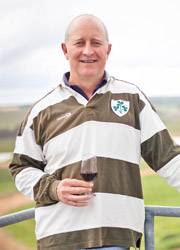 Gavin joined the team at West Cape Howe as Senior Winemaker/Managing Director in 2004, continuing a distinguished career making premium wines in the Great Southern region. He came to winemaking through a long-held love for the land and agriculture, developed growing up in rural NSW. After a visit to Western Australia in 1986 during the America’s Cup, he worked his first vintage in the Swan Valley, then studied winemaking at Roseworthy College in South Australia. Gavin then worked another vintage in the Swan and a vintage in Gigondas, France, before choosing to settle in the cooler viticultural region of the Great Southern in 1988. Having initially expected to stay just a couple of years, the 2014 vintage now marks Gavin’s 25th in the region! With his wealth of experience and depth of knowledge from over a quarter of a century in the Great Southern, Gavin is able to achieve the best in each season in terms of fruit flavour for each variety and from each site, making a wide range of wines with great flavour and balance.